Archive for the 'death' category 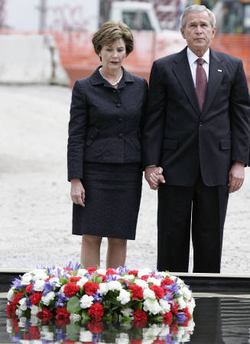 Five years ago today, the United States fell victim to a vicious, unprovoked attack by terrorists acting on the orders of Osama bin-Laden that forever changed this nation and its people.

The acts of violence committed by al-Qaida, terrorists on September 11, 2001 left more than 3,000 people dead and wounded in New York City, in Shanksville, Pennsylvania, and at the Pentagon. This tragedy shall not and should not ever be forgotten. Today, on this grimmest of anniversaries, I hope we will take time to remember what we have lost, to reflect on what we must do and to recommit to meeting the challenges that lie ahead with vigor and determination as the President has asked us to do.

The acts of these few committed fanatics may have led to the destruction of families, the destruction of property and the destruction of a sense of security the end of the Cold War brought to America; but they did not destroy the American ideal, the spirit of liberty that has made this nation a beacon of hope for the world for more than two centuries.

We have responded to these attacks with appropriate force, taking the battle to freedom’s enemies. Since September 11, more than 1.3 million U.S. servicemen and women have joined this battle, with more than 2,900 giving their lives in defense of this noble cause. We owe them and their families a special debt of gratitude.

We have made considerable progress in this fight against terror. Many of the masterminds of September 11 and other terror plots have been captured. They are being detained and will be brought to trial and are, as the President said Wednesday, being treated “with a mercy they denied others.”

To all of you in the Department of Energy family for whom the losses on September 11 were personal, I extend condolences on my own behalf as well as on behalf of the President. I also want to extend my gratitude to all DOE Federal and contractor employees who work so hard to preserve the freedom and welfare of this great country. Together, we continue to pay tribute to those whose lives were taken on September 11, 2001, by serving our Nation and its citizens with honor, humility, and hope.

Everybody’s more upset with this cartoon than they are about the suicide/homicide bombers that [Muslim extremists] make of their little kids.
—Rush Limbaugh

How quickly he forgets. Muhammad Yousef Al-Mlaifi, a director at Kuwaiti’s Ministry of Endowment, believes that

“But how strange it is that after all the tremendous American achievements for the sake of humanity, these mighty winds come and evilly rip [America’s] cities to shreds? Have the storms joined the Al-Qaeda terrorist organization?

…I began to read about these winds, and I was surprised to discover that the American websites that are translated [into Arabic] are talking about the fact that that the storm Katrina is the fifth equatorial storm to strike Florida this year… and that a large part of the U.S. is subject every year to many storms that extract [a price of] dead, and completely destroy property. I said, Allah be praised, until when will these successive catastrophes strike them?

“…I opened the Koran and began to read in Surat Al-R’ad [‘The Thunder’ chapter], and stopped at these words [of Allah]: ‘The disaster will keep striking the unbelievers for what they have done, or it will strike areas close to their territory, until the promise of Allah comes to pass, for, verily, Allah will not fail in His promise.’ [Koran 13:31].”

What Muhammad is failing to remember is last year’s Indian Ocean earthquake and tsunami which killed 200,000 people — about half of which were Muslims from Indonesia. I’m willing to bet Muhammad didn’t call that disaster a “Christian soldier” or a harbinger from the United States. Muhammad is also forgetting about the chronic earthquakes in Turkey and Iran, two countries that are about 99% Muslim.

The ideal of jihad has been corrupted

It’s quite sad that it’s come to the point where a proper study of Islamic culture must be prefaced with the explanation “Not all Muslims are terrorists”. But it’s obvious why the “stereotypical terrorist” is Muslim, as the great majority of terrorist acts in the past 30 or so years have been committed by fundamentalist Muslim extremists.

1998, the U.S. embassies in Kenya and Tanzania were bombed … 2000, The USS Cole was attacked and more than 15 American Sailors were killed in Yemen … 11 Sept 2001, four airliners were hijacked and destroyed and thousands of people were killed … 2002 reporter Daniel Pearl was kidnapped and beheaded … 31 July 2002 5 Americans were killed by a Palestinian HAMAS bomber in Jerusalem while attending school … 12 Oct 2002 more than 200 innocent civilians (including 200 Australians and 5 Americans) were brutally murdered in a Bali nightclub … 29 Oct 2002 more than 700 Moscow theater goers were taken hostage and threatened with execution … 11 Mar 2004 Madrid train bombings which killed 191 people and wounded 1,460 … 1-3 Sept 2004, Beslan, Russia school children taken hostage; 344 civilians were killed, at least 172 of them children, and hundreds more wounded … 7 July 2005 London bombings, 56 people were killed in the attacks, with 700 injured …

*Note that these specific atrocities were not committed within the context of declared wars.

To put this into perspective, there are over 1,000,000,000 peace-loving Muslims in the world who are not extremists. The idea of jihad has been corrupted by extremists to the degree that it justifies the murder of innocent people (especially Jews, Christians, and Westerners) for the purpose of instilling fear and terror into peoples and governments. That some Americans react negatively to the concept of “Arab” or “Muslim” is a testament to the terrorists’ effectiveness in instilling fear and terror.

When law enforcement and government agents are assigned the task of looking for terrorists, it seems prudent to me to profile people who are most likely to be terrorists. Put another way, instead of confiscating the nail file of an elderly woman with Alzheimer’s, we should be looking for terrorists. It’s all about statistics. It would be absurd to ignore them. A distinction should be made between statistical profiling and racial profiling, the latter of which is prejudicial and not based upon common sense.

Many of Jesus’ disciples were eventually put to death for preaching the gospel after Christ’s resurrection. They were willing to die spreading His word. Something of enormous importance must have happened after Christ’s death. One could hypothesize that the disciples would have gone back to being fishermen and carpenters had Jesus not rose from the grave and appeared in the flesh to them.

Posted in death, religion | Comments Off

Reality check: Saddam Hussein killed at least twice as many people as the 2004 Indian Ocean tsunami. 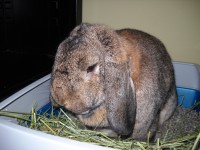