Recently, local blog Greater Greater Washington reported that some residents in Washington D.C. have been exposed to flyers that promulgate a political opinion — an opinion that is likely not shared by the majority of said residents. 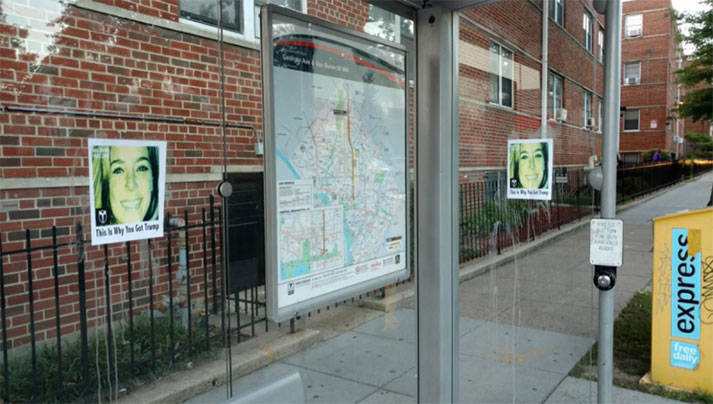 Some of the offending flyers.

Fortunately, people have taken it all in stride, as they’ve quietly acknowledged that the distribution of such flyers is protected political speech, a core facet of the First Amendment.

… Oh, what’s this? It seems that I’ve spoken too soon. Some are not taking it so well, and things are getting a little absurd. Councilmember Brandon Todd has even publicly called for police action (the thought police?) to curb this exercise of free speech:

Are the people who distributed the flyers behaving lawfully?

Solely for the purposes of argument, let us concede that the flyers are indeed inelegant, offensive, and even hateful. But these aspects alone do not exempt the flyers from First Amendment protection, as the US Supreme Court recently reaffirmed:

… the proudest boast of our free speech jurisprudence is that we protect the freedom to express “the thought that we hate.”

A law found to discriminate based on viewpoint is an “egregious form of content discrimination,” which is “presumptively unconstitutional.” … A law that can be directed against speech found offensive to some portion of the public can be turned against minority and dissenting views to the detriment of all.

Now, back to the flyers

The people who distributed the flyers — if they are guilty of anything — might have violated DC law regarding the placement of signs/placards in public rights-of-way. This is a minor violation akin to littering.

Let’s take it back all the way to Article 1, Section 8 of the Constitution, which outlines powers of congress over the federal district (that is, Washington, D.C.):

To exercise exclusive Legislation in all Cases whatsoever, over such District (not exceeding ten Miles square) as may, by Cession of particular States, and the Acceptance of Congress, become the Seat of the Government of the United States …

Additionally, congress has granted the federal government the power to prosecute immigration crimes by way of U.S. Immigration and Customs Enforcement (ICE).

Washington D.C., by declaring itself a “sanctuary city” for illegal aliens, does not magically nullify federal criminal law. To the contrary, DC and other such sanctuary jurisdictions are operating in direct conflict with Title 8, section 1324 of U.S. Code:

Any person who— … knowing or in reckless disregard of the fact that an alien has come to, entered, or remains in the United States in violation of law, conceals, harbors, or shields from detection, or attempts to conceal, harbor, or shield from detection, such alien in any place, including any building or any means of transportation;

In other words, those who harbor illegal aliens can potentially receive up to five years in prison for each alien.

So, no. With respect to this issue, DC leadership is not behaving lawfully in two main ways: