How quickly he forgets. Muhammad Yousef Al-Mlaifi, a director at Kuwaiti’s Ministry of Endowment, believes that

“But how strange it is that after all the tremendous American achievements for the sake of humanity, these mighty winds come and evilly rip [America’s] cities to shreds? Have the storms joined the Al-Qaeda terrorist organization?

…I began to read about these winds, and I was surprised to discover that the American websites that are translated [into Arabic] are talking about the fact that that the storm Katrina is the fifth equatorial storm to strike Florida this year… and that a large part of the U.S. is subject every year to many storms that extract [a price of] dead, and completely destroy property. I said, Allah be praised, until when will these successive catastrophes strike them?

“…I opened the Koran and began to read in Surat Al-R’ad [‘The Thunder’ chapter], and stopped at these words [of Allah]: ‘The disaster will keep striking the unbelievers for what they have done, or it will strike areas close to their territory, until the promise of Allah comes to pass, for, verily, Allah will not fail in His promise.’ [Koran 13:31].”

What Muhammad is failing to remember is last year’s Indian Ocean earthquake and tsunami which killed 200,000 people — about half of which were Muslims from Indonesia. I’m willing to bet Muhammad didn’t call that disaster a “Christian soldier” or a harbinger from the United States. Muhammad is also forgetting about the chronic earthquakes in Turkey and Iran, two countries that are about 99% Muslim.

This entry was posted on Thursday, September 1st, 2005 at 6:56 pm and is filed under death, politics, religion. You can follow any responses to this entry through the RSS 2.0 feed. Both comments and pings are currently closed. 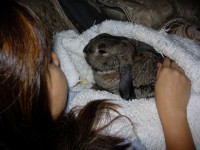