The ideal of jihad has been corrupted

It’s quite sad that it’s come to the point where a proper study of Islamic culture must be prefaced with the explanation “Not all Muslims are terrorists”. But it’s obvious why the “stereotypical terrorist” is Muslim, as the great majority of terrorist acts in the past 30 or so years have been committed by fundamentalist Muslim extremists.

1998, the U.S. embassies in Kenya and Tanzania were bombed … 2000, The USS Cole was attacked and more than 15 American Sailors were killed in Yemen … 11 Sept 2001, four airliners were hijacked and destroyed and thousands of people were killed … 2002 reporter Daniel Pearl was kidnapped and beheaded … 31 July 2002 5 Americans were killed by a Palestinian HAMAS bomber in Jerusalem while attending school … 12 Oct 2002 more than 200 innocent civilians (including 200 Australians and 5 Americans) were brutally murdered in a Bali nightclub … 29 Oct 2002 more than 700 Moscow theater goers were taken hostage and threatened with execution … 11 Mar 2004 Madrid train bombings which killed 191 people and wounded 1,460 … 1-3 Sept 2004, Beslan, Russia school children taken hostage; 344 civilians were killed, at least 172 of them children, and hundreds more wounded … 7 July 2005 London bombings, 56 people were killed in the attacks, with 700 injured …

*Note that these specific atrocities were not committed within the context of declared wars.

To put this into perspective, there are over 1,000,000,000 peace-loving Muslims in the world who are not extremists. The idea of jihad has been corrupted by extremists to the degree that it justifies the murder of innocent people (especially Jews, Christians, and Westerners) for the purpose of instilling fear and terror into peoples and governments. That some Americans react negatively to the concept of “Arab” or “Muslim” is a testament to the terrorists’ effectiveness in instilling fear and terror.

When law enforcement and government agents are assigned the task of looking for terrorists, it seems prudent to me to profile people who are most likely to be terrorists. Put another way, instead of confiscating the nail file of an elderly woman with Alzheimer’s, we should be looking for terrorists. It’s all about statistics. It would be absurd to ignore them. A distinction should be made between statistical profiling and racial profiling, the latter of which is prejudicial and not based upon common sense.

This entry was posted on Tuesday, August 9th, 2005 at 5:43 pm and is filed under death, politics, religion. You can follow any responses to this entry through the RSS 2.0 feed. Both comments and pings are currently closed.

« To the death
Zakat and today’s tax code » 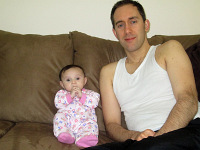