I wonder what effect — if any — Billy Graham’s Crusades and ministry had on the Catholic Church’s Second Vatican Council. Ecumenicism is a major part of Vatican II and was one of Graham’s hallmarks.

Simon and Garfunkel’s “Cloudy” may not be Paul Simon’s best song, but the arrangement is top-notch. If there is ever a Baroque-pop revival, “Cloudy” should serve as the blueprint.

Jens Meiert is delving deeper into the increasing pedantry that is long-term HTML/CSS maintenance.

I’ve decided that I thoroughly enjoy swimming at the beach. Not just wading up to my knees like a little girl but actually swimming.

This entry was posted on Thursday, May 28th, 2009 at 12:12 pm and is filed under fitness, food, music, politics, random, religion, technology. You can follow any responses to this entry through the RSS 2.0 feed. Both comments and pings are currently closed.

« Rediscoveries
Regex to the rescue » 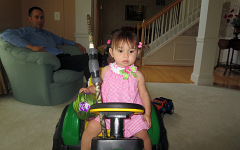