Whom to root for

The film Casablanca got me thinking about the way many of us “choose sides” when we watch a film with war themes. What vexes me is that one can’t always pull for a certain country — no country provides an assurance of consistency. Even the United States is not exempt from this rule, as Clint Eastwood’s complementary films Flags of Our Fathers and Letters From Iwo Jima let on.

In general, yes, one can pull for the United States — unless they’re depicted torching huts deep in the jungles of Vietnam. Pull for England/the United Kingdom, except when they’re at war with America (The Patriot) or with Scottish clans (Braveheart). France is tricky: pull for them during the French and Indian War (The Last of the Mohicans), other colonial conquests, the American Revolution, but then not during the Napoleonic wars (War and Peace, Master and Commander: The Far Side of the World). With few exceptions (the Franco-Prussian War and the Algerian War come to mind), pull for them from the middle of the 19th century onward.

Pull for Germany during the Austro-Prussian War, but not during World War I (All Quiet on the Western Front) or World War II (Saving Private Ryan). It is also permissible to root for “good” Germans (a la The Pianist and Casablanca) but only if the films make it clear that most Germans are bad. Pull for Austria, but only in the months immediately preceding the Anschluss and the subsequent occupation (The Sound of Music). Pull for Russia/USSR during the Napoleonic wars and World War II, but not during the Cold War or the Invasion of Afghanistan…

This entry was posted on Tuesday, August 5th, 2008 at 1:40 pm and is filed under movies, politics. You can follow any responses to this entry through the RSS 2.0 feed. Both comments and pings are currently closed.

One Response to “Whom to root for” 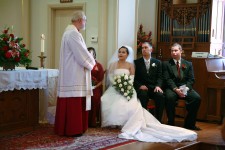