On Friday, I just so happened to re-read an article that I had posted on my website some time ago, Rod Dreher’s “Latin mass as stumbling block?” While I’ve always been interested in attending Latin Mass — and have even gone to some on occasion at St. Matthew’s Cathedral in Washington DC — I didn’t know much about them, or their histories.

A quick read of the Traditional Catholic Directory keyed me in on the various decrees, contrasts, etiquette, history, politics, and locations of the Traditional Catholic Mass, also known as the Tridentine Mass. As it turns out, the Latin Mass that I’ve been attending at St. Matthew’s is the Novus Ordo, that is, the Mass promulgated by Paul VI in 1969, after the Second Vatican Council. The fact that it’s shrouded in Latin doesn’t change the fact that it’s the revised Mass that did away with many Catholic traditions and became more ecumenical and charismatic. I grew up attending a liberal, charismatic Catholic church and I naturally thought of it as “normal”, knowing no other way of celebrating Mass.

After moving to Silver Spring in 2005, I started attending St. John the Evangelist parish, which is but a five minute walk from my doorstep. I quickly noticed how orthodox everything was. Masses were centered more on the fundamentals and less on making the congregation “feel good”.

Looking back, Mass at my old charismatic church was akin to a town hall meeting, with all the shaking hands, smiling, and welcoming that we were encouraged to participate in. And, given the fact that the Pastoral Council tried to shoehorn large helpings of ecumenicism and multiculturalism into every Mass, I ended up spending many Sunday mornings relearning many Catholic (and Protestant!) hymns and responses in Spanish, Tagalog, Swahili, or whatever else they happened to throw at us. This approach may be appealing to many people, but deep down, I longed for something more quiet and more reverent that I knew had to exist somewhere.

As it turns out, Traditional Latin Masses were happening right under my nose. The “Old Church” of St. John’s has been holding such Masses in conjunction with Our Lady Queen of Poland parish, which has shared the building since 1977. How this tidbit of information never reached me until now is a complete mystery. I had the fortune of attending the Mass this past Sunday; I’m sure that I’ll be attending many more. My grandparents have even expressed interest in attending as well. “It’ll be just like the olden days,” my grandmother said.

It did feel like I was going back in time. The women were wearing hats and various head-coverings, and many of the men were in suits. In fact, I felt slightly out of place in my dress slacks and long-sleeve Oxford. It was a Low Mass, so there was no singing of any kind. The only music occurred at the prelude and at the very end. The priest was “mic’ed” only during the readings and the homily, which were the only English parts of the Mass. There were long stretches of time when the priest was facing the altar and had his back to the congregation. Many of the Latin prayers were barely discernible and still more were spoken in a whisper or were simply mouthed. Communion was different as well. Instead standing in lines, congregants knelt at the gate in front of the pews, and the priest would walk back and forth, issuing the Eucharist. As congregants went back to their pews, others knelt in their place.

It was an entirely different experience — miles away from my old “quasi-charismatic” Catholic church, and the polar opposite of many mainline Protestant services/explosions. Needless to say, I felt entirely at home.

This entry was posted on Monday, August 11th, 2008 at 1:27 pm and is filed under religion. You can follow any responses to this entry through the RSS 2.0 feed. Both comments and pings are currently closed.

« Whom to root for
Sodium and sports drinks » 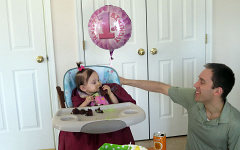