Since I can remember, I’ve always been fond of picking up pennies and other coins that I find on the sidewalk, in parking lots, on public floors, etc. That, coupled with the fact that I meticulously record every monetary transaction in Quicken, means that I spend an inordinate amount of time keeping track of this minute source of income.

A recent New Yorker article showed that the act of picking up pennies on the street amounts to little more than minimum wage, if extrapolated over a full hour. Still, there’s a certain enjoyment in it all, even though pennies — and coins in general — are sadly on their way out. When the half-penny was discontinued in 1857, it “had significantly more purchasing power than a dime does today.” (New Yorker) If the Treasury were rational about its coin-minting policies, the penny, nickel, and dime would not be long for this world. The quarter’s days would also be numbered.

It seems as if the only real utility that coins have now is to make change during a purchase. Many people can’t even be inconvenienced to pay with coins anymore. With credit card companies encouraging that small payments be made with cards, the perceived inconvenience of coins has increased.

As for me, I will continue to pick up pennies on the sidewalk as long as the U.S. Mint keeps producing them.

A vindication of sorts.

This entry was posted on Wednesday, July 23rd, 2008 at 10:58 am and is filed under money. You can follow any responses to this entry through the RSS 2.0 feed. Both comments and pings are currently closed.

« Munch Dallas Brundage
Whom to root for » 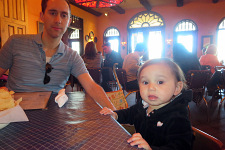