Fleet Foxes at the Black Cat 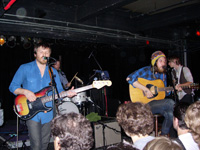 Their performance last night at the Black Cat did not disappoint, although the band was not in full form. Lead vocalist and songwriter Robin Pecknold excused his singing with tales of a cold that has lasted for weeks; he even claimed that those in attendance were being “half-conned” out of their money. To the contrary, his vocals were more or less spot-on, save for a time or two when I could detect some cracking. I was hoping that it would hold up during the a capella numbers, and thankfully, it did. I recall thinking that, “presently, I’ve forgotten what all other voices sound like, and frankly, I don’t care.” They have that good of a blend — Robin’s voice in particular. Their harmonies are tight, high, and wispy, with no apparent bass sound. At times, it sounded as if Pecknold were singing two or three parts simultaneously.

The set started off quiet and subdued. The sold-out crowd became hushed, and no one dared flash their camera. For a while, the audience failed to clap between songs — I’m guessing that we were just awestruck. It’s as if we were about to applaud in church after a particularly eloquent Latin chorale piece. It not something that one does without serious contemplation. Eventually, the mood lightened a bit and the audience was as enthusiastic as ever.

Come down from the mountain; you have been gone too long
The spring is upon us; follow my only song
Settle down with me by the fire of my young love…

The only sour note was the exclusion of quite possibly their most accomplished piece, “Ragged Wood”, a song that evokes a “woodsy” sound — a style recently employed by My Morning Jacket, Band of Horses, and Midlake, among others. I kept waiting for it, but it never came. At the encore, I had one last glimmer of hope, but it just wasn’t meant to be.

As some may know, Josh Tillman is now Fleet Foxes’ drummer, having joined the group in early 2008. I knew Josh back when we were in our teens. We attended the same high school for a few years; he was a grade below me. I told him after the show that I had never set out to find him or his music — his music simply found me over the normal course of events. I started listening to his solo albums and EPs a few years ago; I have a feeling that I’d still be a fan even if we had never had that personal connection back in high school. Seeing him drum for Fleet Foxes was almost surreal, and he has a fine voice as well. I have a feeling that even better things are in store for him and his band.

NPR has a write-up and streaming audio of the show.

This entry was posted on Tuesday, July 8th, 2008 at 6:36 pm and is filed under music, photography. You can follow any responses to this entry through the RSS 2.0 feed. Both comments and pings are currently closed.

« Our political environments
This could be you »