It’s been said that the music you listen to as a young adult will — more often than not — be the music you’ll be listening to for the rest of your life. I’ve been trying to evaluate that axiom in terms of my own listening habits; so far the diagnosis is still quite muddy.

Like most people, my taste has evolved slowly and steadily; lately I feel as though I am settling down — not in the frequency in which I acquire music, but in the rate that I fall out of favor with certain bands or genres.

In my early years, I never listened to the radio and didn’t own any music. Exposure came from lying on the floor in my parents’ living room with an old Sears hi-fi record player and headphones massive enough to cause discomfort after a couple LPs. My parents’ collection was spotty at best. Random John Denver and Beatles albums. At least three albums by the now-obscure Mason Williams.

In the summer of 1989, I received a compilation tape of Beach Boys songs from my uncle in response to my positive reaction to the song “Kokomo”. A year later, I remember wanting to own M.C. Hammer’s breakout album Please Hammer Don’t Hurt ‘Em, and dancing around like a total loser to “Ice Ice Baby”. During this period, I was discovering vapid early nineties pop and listening to oldies. A few years later, I developed an intense obsession of the music of Ace of Base (my first pop CD). Throughout high school, I took to mostly mainstream rock (Weezer, then The Smashing Pumpkins) and pop and listened incessantly to commercial rock radio.

By the end of the nineties, I was acquiring CDs at an alarming rate of one every four or five days. It was as if I were making up for lost time. In 2000, I rediscovered the Beach Boys while taking a music appreciation class at Montgomery College. I embraced them with open arms and became a rapid Beach Boys completist almost overnight. At the same time, I began falling out of favor with commercial rock, especially that which is played on the radio. I started listening to more “indie” bands, more obscure sounds, more classic country, more underground bands.

Which brings me to the point of this post: what (in addition to my own tastes) has changed? I’ll use Semisonic’s breakthrough 1998 album Feeling Strangely Fine as an example. If this album had been released nowadays, I would probably not even hear it, given my aversion to commercial pop and rock radio. If I did happen to hear it, I would probably brush it off, classify it as forgettable, and move on. But yet the album remains a classic in my own mind — dare I say, a minor masterpiece. I must acknowledge that I’m approaching the album with bias. I can’t evaluate it objectively because I continue to view the songs through a lens clouded with good memories: Buying my first car. The bittersweet relief of graduating from high school. The giddiness and elation of having a girlfriend. Becoming independent. Climbing up the lower rungs of the career ladder. Et cetera…

I look back fondly at music from my late teens, yet I recoil with disgust at some of the cookie-cutter “music” being released now. I used to follow the Billboard charts every week and know most of the songs. Now, I’m lucky if I can hum one or two songs in the top 40. I’ve come to realize that the deciding factor isn’t the music itself, but my emotional connection to it. I like to think that I evaluate music more objectively now, as a (mostly) level-headed adult. My appreciation of a new band or particular song won’t be influenced by frivolous things such as unrelated emotions. Or at least that’s my hope.

This entry was posted on Thursday, November 29th, 2007 at 4:57 pm and is filed under introspection, music. You can follow any responses to this entry through the RSS 2.0 feed. Both comments and pings are currently closed. 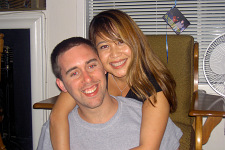