I recently touched on a small OK Computer-related coincidence back in November. Here’s another similar coincidence that bears repeating:

For a little over two years, I split my work days between the Dept. of Energy and the Smithsonian, in buildings facing each other on both sides of the National Mall in downtown DC. Each day before lunch, I’d leave Energy and walk across the Mall, passing tourists and their buses, large packs of school children on field trips, hot dog and t-shirt stands, and the like. One afternoon on my “commute”, I was running a bit late and made a conscious effort to pick up the pace. No sooner had I started walking briskly than Radiohead’s “The Tourist” started randomly playing on my MP3 player. The song is a lament of the average tourist, who, when pressed for time, will try to pack as many events into his day, pausing briefly at photogenic buildings and monuments to take sub-par snapshots.

While the song could easily have been directed at the myriad tourists around me that day, it was also speaking directly to me. People actually tour my city. They spend hundreds of dollars flying or busing themselves in, and I would like to think that they genuinely appreciate the attractions Washington DC has. I live three miles from the DC border, but you’ll rarely find me in DC on the weekends. Perhaps a handful of times a year at most. A shame, really.

This entry was posted on Wednesday, April 4th, 2007 at 12:17 pm and is filed under introspection, music. You can follow any responses to this entry through the RSS 2.0 feed. Both comments and pings are currently closed. 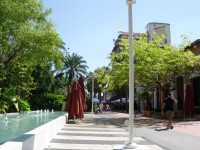