How do politicians acquire nicknames that are often inaccurate, or, at worst, downright wrong? Take, for instance, the Kennedy clan. They are frequently referred to as a “dynasty” or as “American royalty”. What makes JFK’s presidency “royal”, but, say, Woodrow Wilson’s or George H.W. Bush’s presidency not royal? Speaking of which, if titles such as “dynastic” or “royal” should be bestowed upon an American political family, it should be the Bushes, as they have served in executive positions for roughly 2.5 times as long as the Kennedys (26 years vs. 10.5 years). And I am including Lt. Gov. Kathleen Kennedy Townsend’s tenure in this equation, which is indeed generous of me.

And why is Barack Obama always referred to as a “rock star”? I have never heard him sing or play any kind of musical instrument. As far as I know, he has yet to release any songs. Furthermore, isn’t the typical rock star the last kind of person that one would want in the most important executive office in the land? The only thing Obama has in common with the typical rock star is the narcissism. Oh, and the cocaine use.

And why was Ted Kennedy known as a liberal lion? It was obvious that he was a liberal, but what about the lion, an animal known for a powerful libido and a ferocious appetite for raw flesh? Furthermore, people didn’t go around calling Jesse Helms a “conservative caribou” or a “Republican rabbit.” What gives?

This entry was posted on Saturday, March 20th, 2010 at 11:23 pm and is filed under humor, politics. You can follow any responses to this entry through the RSS 2.0 feed. Both comments and pings are currently closed.

One Response to “Political conventional wisdom” 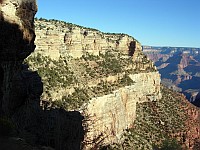