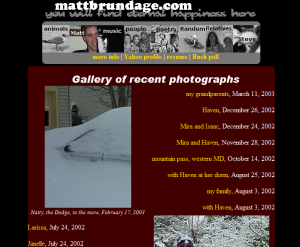 This month marks the tenth anniversary of my website. I registered mattbrundage.com in early 2003, but the site had existed for three years prior at the now-defunct geocities.com.

I’m stopping short of providing a gallery of screen shots of my site through the years, but this I can tell you: the site gets progressively less embarrassing as time goes by. But even in rare instances when the design wasn’t half-bad, the underlying code was — by current standards — atrocious. A few examples:

I feel as if I have finally absolved myself of past web development sins. The only real bright spot in my early code seems to be my wholehearted embrace of CSS.

This entry was posted on Saturday, January 30th, 2010 at 8:57 am and is filed under introspection, meta, technology. You can follow any responses to this entry through the RSS 2.0 feed. Both comments and pings are currently closed. 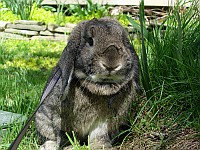