I have mixed feelings about the quietly patriotic Subaru commercial, Welcome Party. Premise: a group of adventurers travel to the easternmost point of the United States every New Year’s Eve to whoop it up and watch the sunrise over the lonely Atlantic Ocean the following morning.

The first few seconds reveal a lighthouse just before dawn, flashing its light on the cold crashing waves. Studying this scene, one can plainly ascertain that this lighthouse is not the West Quoddy Head Lighthouse located at Quoddy Head State Park in Maine. So right off the bat, we have deception. The lighthouse depicted in the commercial cannot even be the easternmost lighthouse in the US.

Then, the narrator intones “it’s not easy getting to the easternmost point in the US…”, as if Maine State Route 189 were merely an unpaved Indian trail.

The narrator goes on: “We like to think of ourselves as a welcome party.” Yeah, but the party happened five hours ago, in Greenwich, England.

The closing shot of the commercial shows a sunrise over what is conceivably Quoddy Head State Park, but now I’m not so sure. In actuality, Canada sort of ruins the view. [Map] [Image] You be the judge.

This entry was posted on Thursday, December 4th, 2008 at 3:15 pm and is filed under humor. You can follow any responses to this entry through the RSS 2.0 feed. Both comments and pings are currently closed.

« Sniff and Munch: What a Bunch!
Peering into the flask » 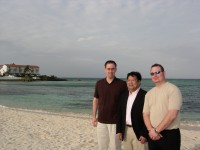