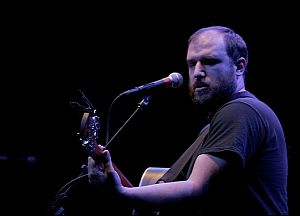 I saw Ben Gibbard, the ever-venerable David Bazan (pictured), and newcomer Johnathan Rice tonight at the 9:30 Club. NPR has a nice little writeup about the show, including download links.

While I bought the ticket solely for David Bazan’s set, I did enjoy Gibbard’s performance. I’m a casual fan of Death Cab for Cutie, but was actually disappointed that Bazan was touring with such a well-known and popular artist. I wanted another intimate show, with only the faithful standing by my side. The crowd was almost oblivious to Rice’s and Bazan’s sets, talking throughout most songs. When Gibbard walked on stage, the conversations ceased. While Gibbard did deserve the attention the crowd gave him, Rice and Bazan should have been afforded the same respect.

I’m officially in a rut with my concert going, with the majority of my shows involving David Bazan in some way. That Man Man show at the Rock ‘n’ Roll Hotel in April doesn’t count because — as much as I enjoyed the show — I probably wouldn’t have gone if a certain someone hadn’t handed me a ticket and offered to drive. Man Man are a kind of “guilty-pleasure” band: not a band to tell your children about, but something to indulge in every now and then.

This entry was posted on Thursday, May 10th, 2007 at 10:39 pm and is filed under music. You can follow any responses to this entry through the RSS 2.0 feed. Both comments and pings are currently closed.

« Vatsana Design
When to Use the Perfect Tense » 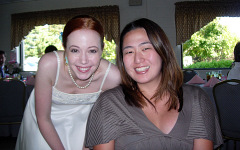