Stephen Thomas Erlewine has a fresh article on Sufjan Stevens which basically condemns him for being the teacher’s pet, his music for being too perfect and pretentious, and his subject research as being too “school-report”. Dare I say I sense a bit of jealously in Erlewine’s heart?

The orchestrations and compositions on SMiLE are purposeful — on Illinois, they’re clever-clever and showy, as the ornamentation of the production is there for its own sake, never there to illuminate or enhance Sufjan’s musical or lyrical motifs. Because, apart from the conceit of writing songs about a particular state, there isn’t much connection to the sound or feel of the state in question. Stevens never taps into the musical history of a state — never touching Chicago blues or jazz, or Michigan soul or rock. He simply uses the concept of songs about a state as a vehicle to deliver his baroque folk-pop …

So, Stevens – instead of creating his own sound – must now ape the style of his forebears? Does Erlewine honestly think Stevens would stand out in the indie world by basically being a cover artist? I can see it now: Stevens in the studio, about to record California. “Now, track one will be my Beach Boys song, my tribute to Weezer and The Offspring will be track two, and now I’ll go write my Glen Campbell knockoff.”

Oh, and contrary to the article, Stevens did touch Chicago blues/jazz: see track 21, “Riffs And Variations On A Single Note For Jelly Roll, Earl Hines, Louis Armstrong, Baby Dodds, And The King Of Swing, To Name A Few.”

This entry was posted on Thursday, July 13th, 2006 at 2:27 pm and is filed under music. You can follow any responses to this entry through the RSS 2.0 feed. Both comments and pings are currently closed. 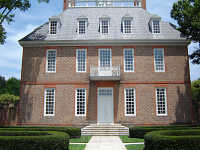