Bazan at the Black Cat 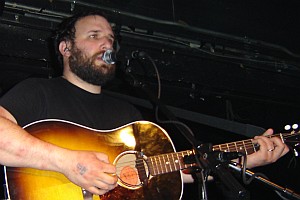 I saw David Bazan (of Pedro the Lion fame) last night at the Black Cat in DC. His solitary voice was accompanied by only his acoustic guitar, and his playing was competent, save for the handful of requests that he granted on the spur of the moment. He managed to play all five songs from his recent EP, Fewer Moving Parts, albeit spread out over the course of his 70 minute set.

He puzzlingly described the new song “Fewer Broken Pieces” as his saddest song ever. I had been listening to it for for a few days, but didn’t regard it as especially sad. Sometimes, you need someone to sing it to you live for it to set in properly. The lyrics are personal and describe the breakup of Pedro the Lion. Bazan appears to be writing from the deepest part of his heart on this one — there’s no pretense. From that perspective, it is the saddest song he’s written. His stories of infidelity, murder, suicide, and depression are sad in their own ways, but only to the extent that the listener draw parallels between the songs and his own memories. “Fewer Broken Pieces” doesn’t ask much of the listener, but it demands much from Bazan.

Opening first for Bazan was Anousheh Khalili, a young woman who has recently gained some notoriety as the voice on a couple of Deep Dish tracks, “Flashdance” and “Say Hello”. Khalili’s voice begged comparison with Neko Case at first, but it had a sly swagger not unlike that of Fiona Apple.

Following Khalili was Andy Zipf. He, like Bazan, had no band and accompanied himself on an acoustic guitar. His voice sounded at times like Cinjun Tate of Remy Zero, and at other times like Greg Gilbert of the Delays. Toward the end of his set, he did an offbeat cover of “Goodbye, Yellowbrick Road”. I could tell he was struggling a bit with the chord changes; I never really realized what a complex song it was.

This entry was posted on Sunday, June 25th, 2006 at 12:00 am and is filed under music, photography. You can follow any responses to this entry through the RSS 2.0 feed. Both comments and pings are currently closed.

« Riddle me this
The Smashing Pumpkins: Bodies » 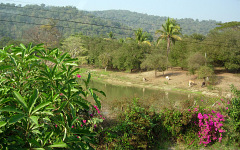