Jesus never “doubted” the Jewish doctrine. For in Matthew 5:17-18, Jesus says, “Do not think that I have come to abolish the Law or the Prophets; I have not come to abolish them, but to fulfill them. I tell you the truth, until heaven and earth disappear, not the smallest letter, not the least stroke of the pen, will by any means disappear from the Law until everything is accomplished.” Jesus’ claim to be the Messiah is compatible with Jewish doctrine. He had immense respect for the law.

Also see John 1:16-17: “From the fullness of his grace we have all received one blessing after another. For the law was given through Moses; grace and truth came through Jesus Christ.” The laws of Moses exist partially to underscore how extremely hard they are to follow, and ultimately, the futility of salvation through human actions alone. Jesus was literally the last sacrifice — His death and resurrection constituted the fulfillment of Mosaic law.

This entry was posted on Sunday, August 7th, 2005 at 6:27 pm and is filed under religion. You can follow any responses to this entry through the RSS 2.0 feed. Both comments and pings are currently closed. 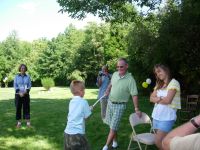