The letter below is her response to the Montgomery County Dept. of Parks. 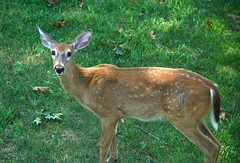 While my husband and I understand people’s concern regarding the current deer population, we strongly oppose your plans for a mass killing of deer when there’s a more humane alternative available. We’ve found information about a protein contraception vaccine that has been effectively used in Gaithersburg and other areas[1]. We’ve also found information that supports the effectiveness and safety of this method and it shows a 60% reduction in the deer population[1][2]. The cost of this method is lower than what is shown on the reports cited on your website.[3]

From NIST: “Two-shot PZP vaccination programs, sponsored by the HSUS, have been more than 90 percent successful at blocking pregnancies for one year in white-tailed deer and wild horses in other areas of the country. In addition to its proven effectiveness, the PZP vaccine can be delivered easily by darts, cannot pass into the food chain, does not affect normal mating behavior, shows no side effects and allows a return to fertility when no longer administered.”[1]

Even if the contraceptive method has to be done annually, the deer population and the need for contraceptive vaccines will decline[2]. This is a better solution than the annual killing of these deer.

If deer have no natural predators, are we to reduce ourselves to the levels of animals and simply kill? What makes us different is that we have the ability to feel compassion. I’ve been in a car accident involving a deer; deer have eaten plants from my garden. However, I don’t see this as justification for a mass killing of these animals. Deer can’t come to public meetings, send emails, or protest for their right to live. It’s our responsibility to protect those who don’t have a voice and are being inhumanely treated.

This entry was posted on Wednesday, October 26th, 2011 at 11:49 pm and is filed under animals, death. You can follow any responses to this entry through the RSS 2.0 feed. Both comments and pings are currently closed.