It all started on May 22, 2009, en route to Bethany Beach. Annie and I pulled up at a stoplight somewhere near Bridgeville, DE. Next to us was a big red truck full of live chickens, presumably heading to a slaughterhouse. The chickens were virtually motionless and didn’t look too happy. Annie became distraught and I’ll admit that I was a bit freaked out by it as well.

The “Cluck Truck” incident has slowly changed our eating habits. While I had been observing meatless Fridays for some time, Annie soon started the same. Once a week became twice a week. Then thrice. Meatless days became the rule, rather than the exception.

Over the summer, our meat supply dwindled and was not replenished. Beef, pork, and chicken: gone. By fall, practically the only non-vegetarian food in our house was fish and seafood. And we’re starting to wean ourselves off the cholesterol-laden seafood as well.

If we had to put a label on our eating habits, we’d be “pescetarians with rare exceptions.” My recent exceptions include a trip to Outback Steakhouse in November (rationalized with a $10 coupon) and a hamburger at a company party last week. Perhaps with time, these dalliances will become less frequent, and then peter out.

This entry was posted on Thursday, December 24th, 2009 at 6:46 pm and is filed under animals, food, introspection. You can follow any responses to this entry through the RSS 2.0 feed. Both comments and pings are currently closed. 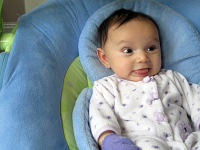