The Grand Canyon and Sedona 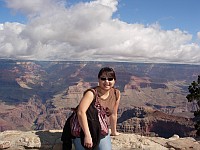 Eariler this month, Annie, two of her three sisters, and I went out to Arizona for a week.

I have to admit: I was a bad tourist. I did virtually no preparation before the trip — I didn’t even look at a map of the general area, the hotel, amenities, et cetera. I couldn’t have even given you a ballpark estimate of how far away we would be staying from the canyon rim. I hadn’t planned a thing. Perhaps my inactivity was due to my general feeling of apathy toward the whole trip. Until we touched down in Flagstaff, I approached the trip as just another situation to slog through — just something that I had to do. Naturally, my expectations weren’t very high. Even Annie admitted that she didn’t expect us to fill up the whole week with touring and exploring.

How wrong we were. Our six-day stay turned out to be the perfect amount of time. Every day was eventful and we remained active. So active, in fact, that we were usually sound asleep by 9 or 10pm. And we’d wake up before the alarm — usually around 6am. Ideal. Arizona was good for our circadian rhythms.

Arriving in Flagstaff on the first day, I made a spur-of-the-moment good decision — one that I was frequently grateful of as the week progressed. I was torn between hiring a taxi or renting a car. In another “bad tourist” move, I had failed to reserve a rental car ahead of time. I simply walked up to the counter at the airport and asked what types of cars they had. I probably paid a premium for this, but as I found out later, it was worth it. I drove that Chevrolet Malibu (The car you can’t ignore) everywhere; we even took a day trip to Sedona. I must tell you, every mile of that trip was scenic. (It would have been ideal to have some John Denver or Glen Campbell CDs with me, but I digress…) The car came in handy at the Grand Canyon as well, as our hotel was a good five or more miles from the canyon rim. Yeah, not renting a car would have been a serious mistake.

Hiking was very gratifying and enjoyable, even with the prospect that, in the event of a false step, I could be instantly impaled, maimed, or suffer blunt force trauma. I spent a good ten hours (spread out over two days) hiking the winding trails down into the canyon. Obviously, the views were beautiful and serene, but it was also unexpectedly quiet. The silence enveloped me. It was akin to being underwater — the sheer vastness and stillness of it all almost seemed to press in on me. It was very surreal – especially when the only sound I’d hear would be the wings of a huge raven, hovering and soaring overhead; or the occasional whisper of wind funneling itself up the canyon walls; or the clip-clomp of a line of pack mules, laboring their way down the trail.

Photos from the trip

This entry was posted on Wednesday, October 29th, 2008 at 10:22 pm and is filed under happenings, photography. You can follow any responses to this entry through the RSS 2.0 feed. Both comments and pings are currently closed.

One Response to “The Grand Canyon and Sedona”

« Mid-month roundup
Sniff and Munch: What a Bunch! »