Recently, you may have heard about the New York City Board of Health’s push to ban artificial trans fats from restaurant menus. Never mind the fact that trans fat occur naturally in meat and dairy products. Or that trans fats are “FDA-approved”. According to the FDA, a full 17% of our fat consumption comes from margarine. I personally got off the margarine train years ago, but I’ll willing to bet that there are thousands of people of the misguided opinion that margarine is the healthier alternative to butter. Just wait twenty years or so, and margarine will be good for you again.

So: liquid oils — made into solid fats by adding hydrogen — will be banned. But what about saturated fats, shown to be correlated to higher rates of atherosclerosis and coronary heart disease? When will the Board of Health push to ban meats, daily, and cheeses, all of which are typically high in saturated fats? Soon, all we’ll have left to cook with is olive oil. Until they declare war on monounsaturated fats.

Sure, the Board of Health may be trying to act in the best interests of the public, but how far should legislation go? Consider this nugget of wisdom from Barry Goldwater:

I have little interest in streamlining government or in making it more efficient, for I mean to reduce its size. I do not undertake to promote welfare, for I propose to extend freedom. My aim is not to pass laws, but to repeal them. It is not to inaugurate new programs, but to cancel old ones that do violence to the Constitution or that have failed their purpose, or that impose on the people an unwarranted financial burden. I will not attempt to discover whether legislation is “needed” before I have first determined whether it is constitutionally permissible. And if I should later be attacked for neglecting my constituents “interests,” I shall reply that I was informed that their main interest is liberty and that in that cause I am doing the very best I can.

Goldwater’s words strike a chord with those who believe New York is turning into the “Nanny State.” Additionally, the excerpt stands up like a fortress to the illogic of New York State Senator Carl Kruger, who has proposed legislation banning iPods and other such devices whilst crossing a city street.

Kruger says that while he is trying not to intrude upon personal freedoms of New Yorkers, it becomes difficult to leave the problem alone when pedestrians tune-in to an iPod/Blackberry/cell phone/video game only to walk blithely into a speeding bus or moving automobile to meet with near certain death.

Yes, Kruger may say that he is “trying not to intrude upon personal freedoms of New Yorkers…”, but he is failing miserably at his goal. Even without considering the personal liberty issues at stake in this issue, consider the holes in his proposal:

Seriously, Kruger acts as if pedestrian deaths suddenly started happening after the iPod was launched in 2001. I hate to break it to him, but non-attentive pedestrians have been getting run over for millenniums. If this illogical proposal becomes law, expect New Yorkers to take to the streets. With their iPods and french fries, of course.

This entry was posted on Friday, February 9th, 2007 at 10:30 pm and is filed under death, food, music, politics. You can follow any responses to this entry through the RSS 2.0 feed. Both comments and pings are currently closed. 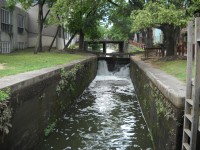