The Bedford Handbook notes that “in the subjunctive mood, there is only one past-tense form of be: were (never was).” (342) Bedford also acknowledges that the subjunctive “causes problems for writers” (342) (because at first, they don’t appear grammatical), is used less often than indicative or imperative moods (341), and was “once more widely used.” (343)

This entry was posted on Sunday, September 18th, 2005 at 12:21 pm and is filed under language. You can follow any responses to this entry through the RSS 2.0 feed. Both comments and pings are currently closed.

« The Utility of Sidebars
Human Diversity in Interactive Systems Development » 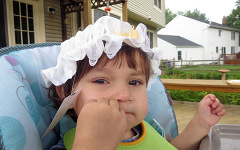