What a difference five days can make. Up until last night, I’d been completely cynical about the state of the movie industry in 2005. Some friends of mine wanted to go out to the movies, to see nothing in particular. I suggested Kung Fu Hustle and it turned out to be astoundingly good. It started out as almost noir-ish, but quickly progressed into a surreal, heavily styled comedy. It wasn’t a particularly “smart” movie, and it never got pretentious. It’s in Mandarin (most likely) with English subtitles, but I found that for some scenes, I didn’t really need the subtitles to know what the actors were saying (as strange as that may seem).

This entry was posted on Saturday, April 23rd, 2005 at 12:34 am and is filed under movies. You can follow any responses to this entry through the RSS 2.0 feed. Both comments and pings are currently closed.

« War and Peace in progress
I’m not jaded yet » 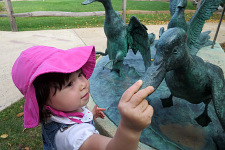