It is possible that the memories we have — especially the older ones — are only partially accurate. I do have an episodic memory from late winter of my third year (I was almost three years old). I am riding a ‘bananawheel’ — essentially a large yellow plastic banana with wheels and a steering bar. I remember riding it down four or five steps. However, the room in which I am in is white and gray, almost featureless. This is all I remember. Later, my mother told me that I fell down a full flight of steps on my bananawheel while at my grandmother’s house (I suffered no serious injuries). The stairs at my grandmother’s house are enclosed on each side by walls — they are not open as in my memory. Also, my memory puts the number of steps at but four or five, not the full flight in reality. Also intriguing is that I can almost see myself falling down the stairs, as if I’m a third party witness. My mother tells me she heard only three bumps as I fell, which probably means I skipped the majority of the steps on my way down. :)

This entry was posted on Thursday, October 28th, 2004 at 11:07 pm and is filed under introspection. You can follow any responses to this entry through the RSS 2.0 feed. Both comments and pings are currently closed. 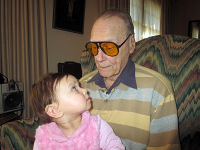